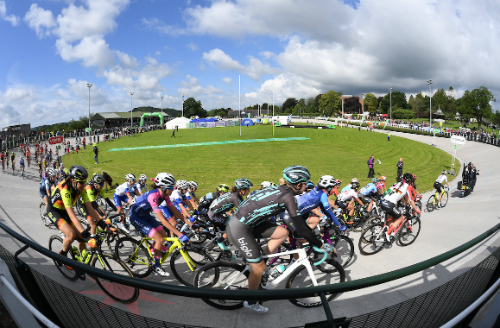 The grand finale of the OVO Women’s Tour has been a resounding success, with thousands lining the route to cheer the cyclists on their 79 mile race through Carmarthenshire.

Carmarthenshire County Council, which has hosted the race, has thanked all communities, businesses, volunteers and spectators, as well as event staff, security, marshalls and emergency services, for helping making it a special day for the county.

Stage Six of the race saw the best female cyclists in the world competing in a series of sprints, mountain climbs and descents through some of Carmarthenshire’s most breath-taking landscape, starting at the historic Carmarthen Velodrome, crossing the Black Mountains and ending at the Closed Road Circuit at Pembrey Country Park.

Communities came out in force to provide a carnival atmosphere, with many putting on their own events and family activities.

The race was won by Lizzie Deignan.

A summary of the race and a flavour of the community atmosphere can be found here.

“This is a unique opportunity for us to showcase our stunning landscape and scenery, which I know has provided one of the most challenging stages for the cyclists in this year’s Tour, but has taken in some of our most breath-taking mountains, valleys and of course our wonderful communities.

“Hosting major events like this is so important for Carmarthenshire, both in terms of its economy, and in sealing its growing reputation as a player on an international stage.

“I am proud of my team at Carmarthenshire County Council who have worked so hard alongside SweetSpot Group to bring the Tour to Carmarthenshire, but also the support of people and businesses who have created a fantastic atmosphere and given a warm Welsh welcome to everyone who has come to enjoy the day with us.”

Cllr Peter Hughes Griffiths, Carmarthenshire County Council Executive Board Member for Culture Sport and Tourism, said: “The OVO Energy Women’s Tour has been a resounding success, and has been the perfect showcase of our best landscape and cycling facilities.

“As a local authority, we are proud of our significant investment in facilities and infrastructure to support the growing cycling enthusiasm that we’re working so hard to build. Today’s race started at the historic Carmarthen Velodrome, the oldest in the world, and ended at our purpose-built National Closed Road Circuit at Pembrey Country Park.

“We are particularly proud of Manon Lloyd (Drops), who is from Carmarthenshire and who started her cycling career with Towy Riders in Carmarthen. It must have been a fantastic feeling for her to compete with the best in the world on home soil and I hope she felt the strength of the crowd behind her.”