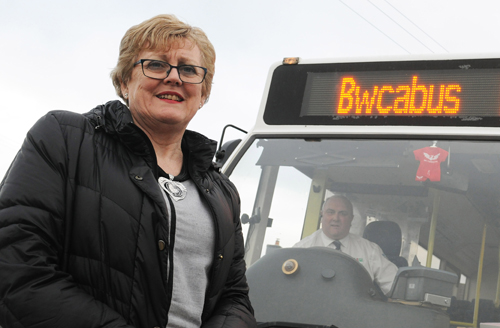 A rural bus service that has been described as a lifeline to its passengers is celebrating its 10th anniversary.

Bwcabus operates six days a week in the Teifi Valley within north Carmarthenshire and Ceredigion, and across Pembrokeshire, allowing users to pre-book journeys or use fixed services to link into TrawsCymru and other local bus services.

Its users have otherwise little access to the public transport network, and - they say - it helps them maintain jobs, see their GPs, and socialise with friends.

Passengers such as Janet Davies, from Talgarreg, said Bwcabus was her ‘only lifeline’ and played an important part in maintaining her independence.

She uses the service weekly as she has no other means of transport.

“This bus is amazing – the service is so reliable and the drivers are always pleasant,” she said.

Anona Jones, from Ffostrasol, is one of the service’s longest serving users. She said she was only able to hold down her job at Glangwili Hospital thanks to the reliable service Bwcabus provided. Now retired, she continues to use the service for socialising, and said: “without Bwcabus I would be in a mess – we would have to move.”

Launched in Carmarthenshire and Ceredigion on August 24, 2009, the ‘demand responsive’ service is led by Carmarthenshire County Council, on behalf of a cross-county partnership.

Such was the success of the scheme that it was extended in to Pembrokeshire in 2017 to further benefit rural communities.

Cllr Hazel Evans, Executive Board Member for Environment, said: “People living in our north Carmarthenshire communities who can’t access main line bus services are able to book a journey allowing them to travel throughout the Teifi Valley. It enables them to access healthcare, local services, employment, training or to visit family and friends, and to connect to other bus services to travel further afield to places such as Aberaeron, Aberystwyth, Cardigan and Carmarthen.

“We know from speaking to our passengers how much of a lifeline the service has been over the last 10 years, and we hope it will continue to be a part of their lives for many years to come.”

To book a journey call 01239 801 601 or go to www.bwcabus.info. Bookings can be made up to a month in advance. Concessionary bus pass holders in Wales travel free. MyTravelPass cards are accepted.