HM The Queen’s last visit to Carmarthenshire in June 2002

The Chair of Carmarthenshire County Council has written to the Royal Family expressing the county’s great sadness following the death of Her Majesty The Queen.

Flags have been lowered to half-mast at Carmarthen’s County Hall, Llanelli Town Hall and Ammanford Town Hall as a mark of respect. Blue flags at Cefn Sidan Beach and Pendine Beach have also been lowered.

Books of Condolence have been opened at County Hall, Carmarthen; Llanelli Town Hall and the HWB, Ammanford on Monday, September 12. They will be open from 9am-5pm Monday to Thursday, 9am-4.30pm on Friday and from 11am-4pm on Saturday and Sunday.

Members of the public are invited to leave a message of condolence, or to visit the national e-Book of Condolence on the Buckingham Palace website.

Flags were flown at full-mast at Carmarthen’s County Hall, Llanelli Town Hall and Ammanford Town Hall from 11am on Saturday, September 10, to mark the Proclamation of the new Sovereign. Blue flags at Cefn Sidan Beach and Pendine Beach were also flown at full-mast.

All flags were returned to half-mast at 1pm on Sunday, September 11, and will remain at half-mast until the day following the HM Queen Elizabeth II’s funeral.

Floral tributes can be placed at the steps of County Hall, Carmarthen, the Remembrance Garden on the grounds of Llanelli Town Hall, and the gates of Ammanford Park.

In line with national events, a Proclamation of the new Sovereign was read by the Chair of Carmarthenshire County Council, Cllr Rob Evans on the steps of County Hall, Carmarthen at 12.45pm on Sunday September 11.

The proclamation was read in Welsh by Mr David Parry Williams, Deputy Lord-Lieutenant of Dyfed.

Civic dignitaries and members of the public also attended the event.

Further information about events will be shared on the council’s website and social media feeds.

HM The Queen’s last visit to Carmarthenshire was in June 2002 as part of her Diamond Jubilee tour of the UK.

Accompanied by HRH Duke of Edinburgh, she visited Burry Port Harbour to open a new lock and meet RNLI volunteers at the lifeboat station, then drove along the Millennium Coastal Path to the beach promenade in Llanelli where she officially opened the new Millennium Coastal Park.

Proclamation of the new Sovereign will be read on the steps of County Hall, Carmarthen, at 12.45pm on Sunday September 11

Guidance for the public and businesses on the period of National Mourning following the demise of Her Majesty Queen Elizabeth II. 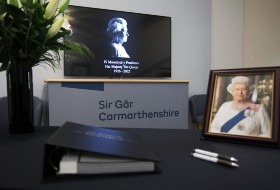 Books of Condolence are now open at County Hall, Carmarthen; Llanelli Town Hall and the HWB, Ammanford. They are open from today, Monday 12 September until Sunday 18 September.