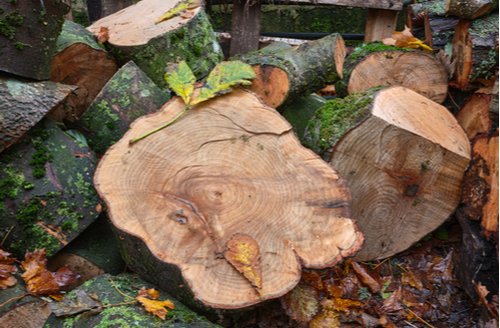 Felling work is underway in Carmarthenshire to remove diseased ash trees which are a risk to road users.

Works are being carried out in the Llandeilo, Llandovery, Talley and Cwmann areas to remove a number of trees affected by ash dieback disease.

The trees, which are the responsibility of Carmarthenshire County Council, are showing at least 50 per cent dieback in their crown and are being felled as they are at risk of falling on the highway.

Works are being carried out:

Traffic management will be in place whilst the works are carried out which may cause some disruption.

Where mature trees are removed, bat boxes will be installed on adjacent healthy trees to help mitigate against the loss of potential habitat.

Ash dieback is a fungal disease which attaches itself to the leaves of ash trees and spreads through to the branches, causing the tree to die. Dead branches and entire dead trees can become very brittle and fall, posing a serious risk to the public.

The majority of diseased ash trees adjacent to the highway are privately owned and the council is working with landowners to encourage them to take the necessary action to remove any trees which pose a similar risk to the public, and for which they are responsible.

Executive Board Member for the Environment Cllr Hazel Evans said: “Ash dieback is a serious issue for councils and landowners across the UK; it is estimated 90% of ash trees could die from this disease with currently no known treatment.

“Unfortunately, the council has no choice but to remove infected trees if they are in a location which poses a risk to public safety. We will try to minimise the disruption to road users as much as possible.”

The removal of trees with ash dieback is a dangerous and specialised job and should only be carried out by experienced tree surgeons.

Executive Board Member for Biodiversity Cllr Philip Hughes added: “We are doing all we can to mitigate the effect on our wildlife, for example, where we have to remove diseased trees, we are putting up a number of bat boxes in healthy trees to provide new roost sites for bats.

“We will also be carrying out a programme of tree planting to help make up for the loss of ash trees in the county.”

Further information on ash dieback disease including information and advice for landowners.