Carmarthenshire County Council has strengthened its commitment to tackling climate change with the launch of a new campaign as part of its net carbon zero target.

Prosiect Zero Sir Gâr will shine a spotlight on every effort that continues to be made as the authority works towards being completely carbon neutral by 2030.

It will involve thousands of council staff, local schoolchildren, businesses and residents and hopes to inspire and encourage everyone to play their part in tackling climate change by reducing Carmarthenshire’s carbon footprint.

Every effort and change made - large or small - will help towards the target of becoming net carbon zero.

Prosiect Zero Sir Gâr calls on people to make changes, share ideas, and start conversations at home, in shops and offices, in classrooms and on social media to encourage everyone to work together to tackle climate change.

Schoolchildren will be encouraged to become Prosiect Zero Super Heroes by learning about the issue and taking positive action at school and at home to help protect the planet for their future.

The project has launched on the first day of COP26, a global summit for climate action being hosted over the next two weeks in the UK.

Prosiect Zero Sir Gâr will raise awareness about what the council is already doing and to mobilise more action from staff, residents, businesses and schools.

Cllr Ann Davies, who holds the Cabinet portfolio for climate change said this is an opportunity for everyone to get involved in making real change for the good of future generations.

We must all take action now - climate change is already having an impact in Carmarthenshire,” she said. “Every one of us can make a difference. It could be as simple as turning our thermostats down a degree, switching off our lights when they’re not needed, or recycling as much as we possibly can.
“By launching Prosiect Zero Sir Gâr we want to inspire collective action. The smallest of actions will build together to make a big difference.
“As an authority, Carmarthenshire County Council is absolutely committed to becoming net carbon zero by 2030. We have already made massive strides towards this but we recognise more needs to be done. We need everyone - our staff, our residents, businesses and schools - to come together and do more.
“Talk to eachother, educate yourself on climate change and take positive action. Tell us what you are doing so we can share ideas and inspire others - we can do this if we all work together.”

Carmarthenshire County Council’s action towards net carbon zero covers every area of its services - more information many of these measures will be shared as part of the Prosiect Zero Sir Gâr launch during the COP26 fortnight.

As well as procuring all its electricity from renewable energy sources, the council has made other efforts to reduce carbon emissions including converting street lights to low energy LED and upgrading its fleet to include electric cars and more energy efficient refuse and gritting vehicles.

The authority is also working with other public bodies to deliver wider change, and is exploring opportunities for tree planting and renewable energy generation on council-owned land.

People in Carmarthenshire are being encouraged to drive more efficiently and cut ...

Carmarthenshire County Council is progressing its plans to achieve a 70 per cent ...

Vehicle charging hub, a first of its kind in Wales

A new electric vehicle charging hub, a first of its kind in Wales, is soon to be ...

As our future generations, the children of Carmarthenshire are playing a vital r ...

Reducing carbon emissions from our fleet

We are taking a pragmatic approach towards becoming a net carbon zero local authority by 2030, with our initial focus being on our measurable carbon footprint. 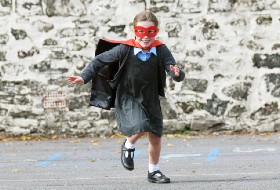 Who is your Prosiect Zero Sir Gâr superhero?

We want our primary schools to come up with their very own Prosiect Zero Sir Gâr superheroes with special powers to tackle climate change and save the planet.

People in Carmarthenshire are being encouraged to drive more efficiently and cut ...

Carmarthenshire County Council is progressing its plans to achieve a 70 per cent ...

Vehicle charging hub, a first of its kind in Wales

A new electric vehicle charging hub, a first of its kind in Wales, is soon to be ...

As our future generations, the children of Carmarthenshire are playing a vital r ...